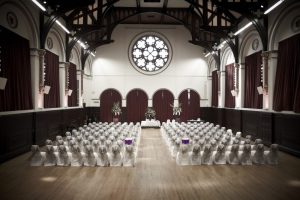 In 2016 Ealing Council announced a deal to dispose of most of the Town Hall to a private developer to convert into a boutique hotel.  The Victoria Hall and Princes Rooms underneath it form part of the deal.  The Council would only keep the east wing with the Council Chamber and marriage rooms.

The deal was met with much dismay. People said the Council had no right to dispose of the Victoria Hall which was built for charitable purposes in 1893 from public donations. Since that time the Hall has belonged to a charitable trust whose trustees – few of them seem aware of this – are our elected councillors. Councillors are required to exercise their role as trustees quite differently from the way they work as councillors.

The Council needs the Charity Commission’s permission to vary the Trust for the Victoria Hall’s disposal and first it must consult key stakeholders about its plans.  So Ealing launched a consultation on 3 November 2017. Surprisingly, the consultation makes no reference to the Council’s plan to dispose of the Trust’s assets and Ealing Voice has complained to the Charity Commission about this.

Ealing Voice has tried to clarify just what was built with the money raised by public subscription. It’s now clear it includes both the Victoria Hall and the Princes Room below. Ealing Voice has also tried to investigate the trust’s accounts. This has proved difficult as separate accounts are no longer kept. Nevertheless, the evidence shows that the Town Hall and the Victoria Hall remain different entities.

Ealing Voice believes the aims and purposes of the charitable trust remain as valid now as when the Victoria Hall was built. Furthermore, the Victoria Hall and Princes Rooms appear to generate hundreds of thousands of pounds a year in letting fees which should be enough for them to continue to operate viably.

Ealing Voice is therefore objecting to the Council’s application to change the Trust and dispose of its assets. It hopes others will support them by objecting too.

This article has 21 Comments