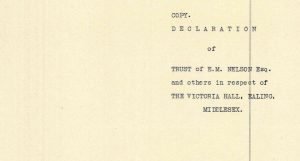 You may have heard that the Council issued a second consultation on the Victoria Hall Trust. The closing date is March 2nd.

This move took everyone by surprise as it was not explained how the two consultations relate to one another. Many who had responded to the first consultation contacted Ealing Voice asking whether they should respond again.

We therefore contacted the Council to ask them what we should do. They tell us that they will consider responses to the two consultations together after the second one closes on March 2nd.  In doing so they say they will:

‘take into account any representations we receive relevant to the first consultation that we happen to receive in response to the second consultation and vice versa.’

Our advice therefore is that if you feel you commented sufficiently in your response to the first consultation you DO NOT need to repeat your comments again.

On the other hand, the second consultation specifically invites the public’s opinion about its plans to dispose of the Victoria Hall, and if you have not already done so you may wish to offer further views about this. Unfortunately, while this consultation gives a bit more detail than the first one did about the Victoria Hall and the charitable trust which runs it, some information Ealing Voice thinks is needed to give a considered opinion is still unavailable. Three months after we first asked we still do not know:

Ealing Voice thinks that the details provided with the second consultation raises further concerns. In particular:

All in all, the council seem to be accepting now that the trust has been mismanaged for many years. History proves there are too many too many conflicts of interest between the Council’s role as a local authority and that of Charity trustee.

The latest consultation shows that the Council now realises alternative sources of funding maintenance do exist including from ‘external grants and other income sources’ or by raising commercial hire rates. Ealing Voice thinks these sources need to be much more fully investigated than they have been. Disposal of the trust’s assets as is currently being proposed must be a very last resort.

This is something that has a lot further to run. We shall keep you posted.