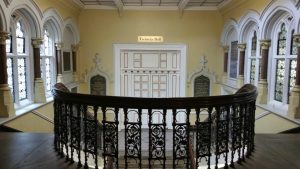 The consultation, which is currently due to finish on 9th February, has already been extended twice by Ealing Council as it struggles to put together and release important information requested under FOI (Freedom of Information). We have now had to raise a complaint about the FOI response and ask that if the outstanding questions are not answered in full by Friday 2nd February then the consultation is extended again.

Ealing Voice has also requested that this consultation, which we regard as fundamentally flawed and deliberately misleading, is totally withdrawn and subsequently reissued with more appropriate content. It is clear from public responses to the Council and Charity Commission that many of you share these feelings and desire.

We have asked for clarification on exactly which parts of the Ealing Town Hall site belong to the trust. It is clear from information released under FOI that this includes, at the least, the entire ‘Memorial Hall’ building containing the Victoria and Prince’s Halls, although the Council has not yet admitted this. But we are still waiting for promised archive research to be carried out by the council to complete that part of our FOI request and hopefully provide a definitive answer about other sections of the buildings. It is quite shocking that the Council, as trustee(s), does not know the extent of the Trust’s property which it intends to give away…

Accounts for the Trust

The Council has not kept separate accounts for the Trust for decades and has mixed up income from the halls and expenditure on them with that of the Town Hall generally. We have asked for separate accounts, which are legally required to be kept for the trust anyway, under FOI but this has not yet been complied with. We have however received accounts which itemise the income from the halls, and which show expenditure for the whole Town Hall. As the Memorial Hall represents perhaps 20% of the total area of the Town Hall complex it is possible to carry out some basic calculations and arrive at the conclusion that the Trust can be self financing.

We await full accounts for the Trust under FOI, but the figures received so far are attached here. Please note that the loss shown is for the entire Town Hall site, including the Council Chambers, not for the property covered by the Trust.

Proposed deal with Mastcraft to dispose of the Trust’s assets

We asked: “Bearing in mind the Council’s intention to dispose of the Trust’s assets please would you provide the full terms of the deal struck with Mastcraft as they pertain to those assets”

As with the matters above, we have referred this question back to Ealing Council for an internal review as the first stage in escalation of a complaint to the Information Commissioner.

We will update again as soon as any additional information is available. Please do help keep up the pressure by making your own requests to the Council for any information you believe is necessary to make an informed decision about the future of the Trust and in support of our requests as outlined above.